In Part 1, fifth-generation helmsman of the TUSTING ship, Alistair Tusting and his 18-year-old son, Fin, began a day of sartorial rejuvenation at the hands of top stying duo, Grey Fox (David Evans) and SartoriaLab (Sarah Gilfillan). At that bastion of English footwear excellence, Crockett & Jones, they were skilfully helped to choose a pair of dark brown suede brogues and chestnut full-grain brogue boots respectively. Thus shod, they went on the hunt for some clothes.

Time For Some Threads

Cordings of Picadilly is one of London’s shopping jewels – a delight to visit, it is a visual step back in time, but is filled with a cornucopia of classic and contemporary English clothing for men and women. We’ve worked with Cordings before, to design an exclusive version of our Clipper bag for them, but smart casuals were on the menu for Alistair on this day and the combined power of one style blogger (the Grey Fox) and two stylists (in the shape of Sarah-SartoriaLab and Nino, the fabulous in-house stylist at Cordings) was enough to render Alistair to a level of compliance never before seen! 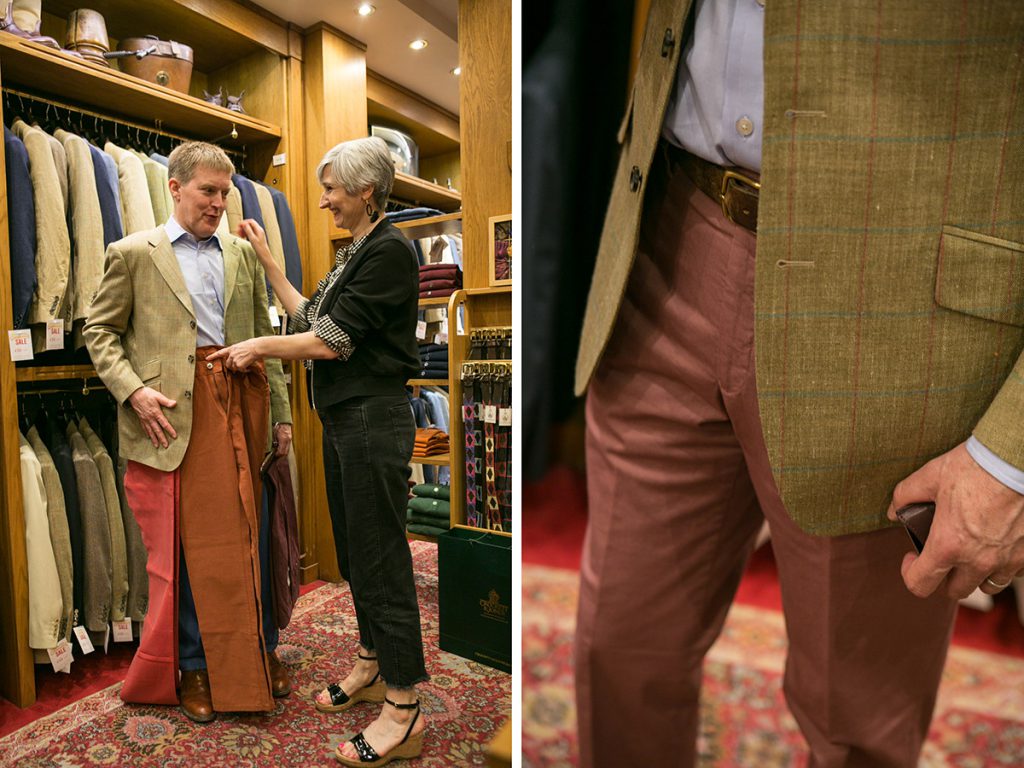 A lightweight jacket made of wool, silk and linen tweed hit the spot after a lot of deliberation on just which colour and some beautifully fitting tan chinos were also joined by some ‘brave pants’. Usually, this is a term used to describe underwear with fantastical hero-inducing properties for tasks which otherwise would turn the knees to jelly, however, these are more the sort that requires a bit of bravery to wear – if only for Alistair. Not underwear these, but a pair of lightweight gaberdine trousers, which, whilst in the closeted interior of the Cordings basement were a dusky dark-pink, once outside in the London sunshine, they took on a whole new personality, perfect for summer festivities.

Next, Some Proper Shirts

Heading to another London jewel in specialist shirtmaker Budd, our team seemed to almost consume the tiny shop in Picadilly Arcade but we were welcomed with open arms and met lots of lovely and varied customers whilst we were there. Another company with a heritage going back over 100 years, a visit here is as much an education as a shopping trip, the depth of knowledge in their craft and materials is a joy.

Fin got straight to work, fitting like a hand in glove into their slim-fit shirt in crisp white, jazzing it up with a wild splash of colour from a paisley bow tie. Time for a photo; as Jermyn Street is not a complete hunting ground for the younger shopper, Sarah and David had discussed which other British brands might be able to fulfil Fin’s requirements, and had arrived in London with a bag of goodies for him to choose from. Slipping into some cracking British-made slim-fit jeans from young Sheffield-based brand Forge Denim and a relaxed cotton blazer from Realm and Empire, a young, cool-but-smart look emerged which Fin was really happy with.

Alistair found himself between two of Budd’s standard fittings – not a problem at all: the in-house alterations service could sort that out and a cool pink striped shirt was chosen with a forest green tie to complement the forthcoming navy herringbone suit from Susannah Hall. Sorted!

Next, a call on Richard Harvie at Harvie & Hudson. A bright, light-filled shop which is a riot of colour, this is the place to go for a gorgeous linen suit, blazer or jacket and an incredible choice of colourful shirts. The English summer seemed to be personified in Richard’s selection of offerings. Mrs Tusting and the styling team tried very hard to persuade Alistair that a lovely green linen jacket with a bold check line would be great for summer, but perhaps still recovering from choosing the brave pants, Alistair held fast and settled on a pale blue shirt with sweet floral accents in the collar and cuffs. 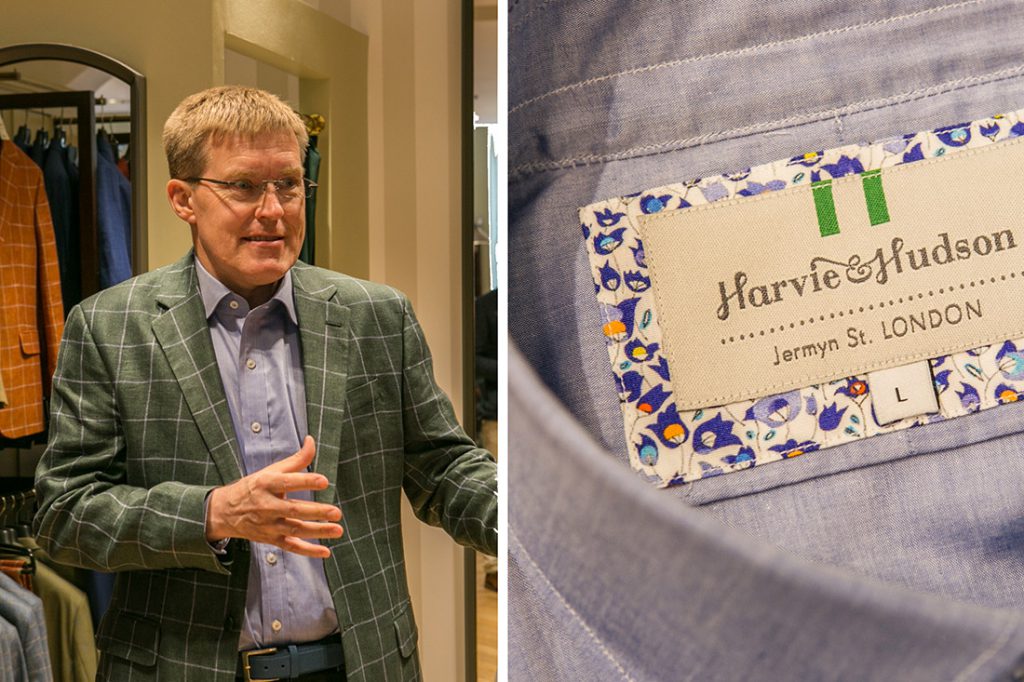 One final store followed – another stop for Fin – at Jigsaw in the lower reaches of Regent Street, yielding some smart lightweight navy trousers and a cool burgundy knitted tie. Teamed with a great patterned shirt from Simon Carter (another great brand from Sarah and David’s bag of goodies) and another look was complete. It was time for some ‘after’ shots, so Alistair got those brave pants on, together with the jacket from Cordings, Harvie and Hudson shirt and tie from Budd. Both outfits were complimented perfectly by the Crockett & Jones footwear of course!

The Big Reveal – Before and After 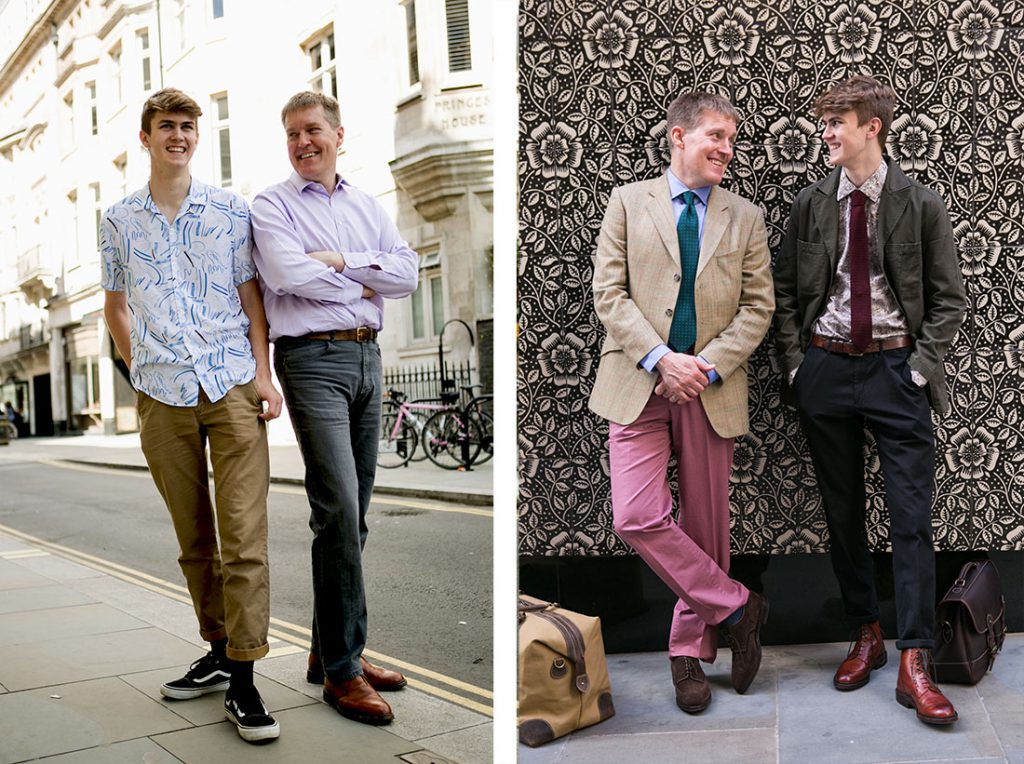 With thanks again to the amazing Olivia that is the photographer known as Polskey.

Stay tuned for Part 3 when Alistair gets his special new suit from Susannah Hall!