This Tuesday we were delighted to welcome members of the press, friends of TUSTING and colleagues from the premier society for inspiring women, The Sorority, led by Lisa Tse, to an event at Livery organisation The Leathersellers Company at their Hall just off Bishopsgate in London.

A livery company is one of 110 organisations in the City of London descended from medieval trade guilds which play a significant part in City life, not least by providing charitable giving and networking opportunities for its members (also called Liverymen). These Liverymen - who can actually be men or women - inherit their status and hold the Freedom of the City of London, which gives them the responsibility to vote for the civic offices of the City, including the Aldermen and the Lord Mayor. 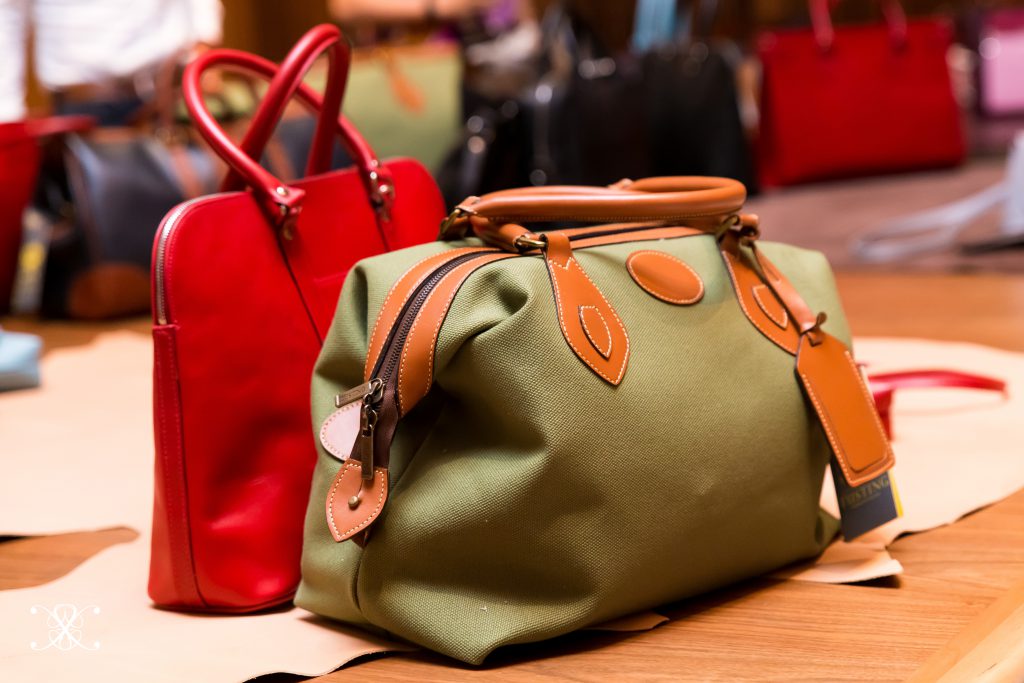 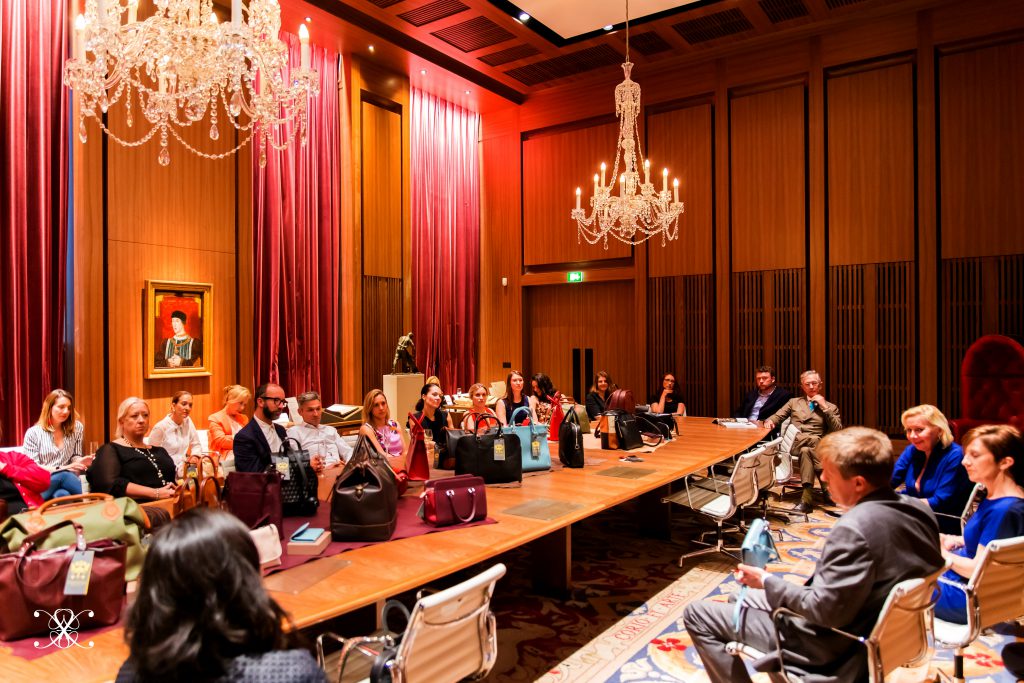 Assembled guests, with discussion between Alistair and Gillian Tusting, led by Frances Card

Founded in 1444, The Leathersellers is one of London’s oldest livery companies and is ranked fifteenth in order precedence. Comparatively recently - in 1940 - Jack Tusting was invited to join the Livery on account of his work as an influential tanner, and now four generations of the Tusting family members have been, or are Liverymen, including John Tusting acting as Master in 1990 and Alistair Tusting, who is currently in post as Fourth Warden.

Our event this week was held at the stunning new Leathersellers’ Hall, the seventh Hall in the Company’s long history. Officially opened just last month, by the Earl of Wessex, it is located on the south side of St Helen’s place, immediately in front of the medieval church of St Helen’s Bishopsgate. The new Hall stands exactly where the second hall was located up until 1799. 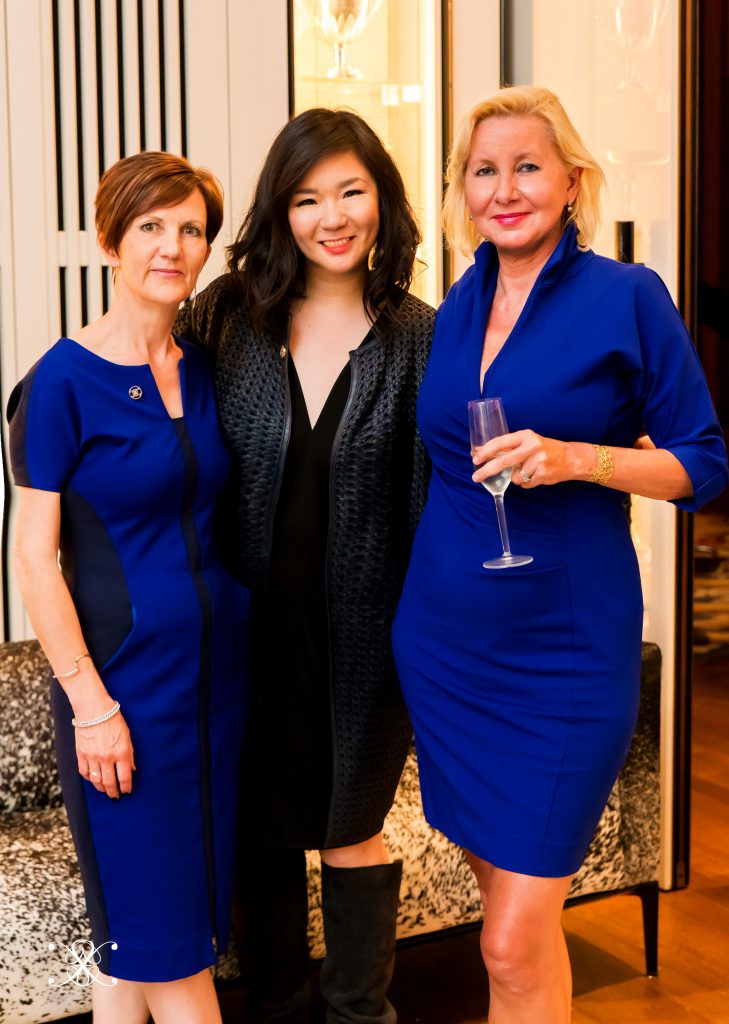 This imposing Hall is a total new-build apart from its early 20th-century façade, which was retained from the last major redevelopment of St Helen’s Place in the 1910-1926 period. Internally, the entire structure is new however a number of features from earlier halls have been preserved and incorporated, providing a contemporary feel with reminders of the Company’s long and illustrious history.

We welcomed our guests to the Hall with a champagne reception, allowing a little time for them to take in the reception room and fabulous entrance hall. There was much admiration directed towards the beautiful Chihuly chandelier which was commissioned especially for the new Hall,  quite a treat as there is only one publicly visible one in the UK, which is situated in the V&A museum. 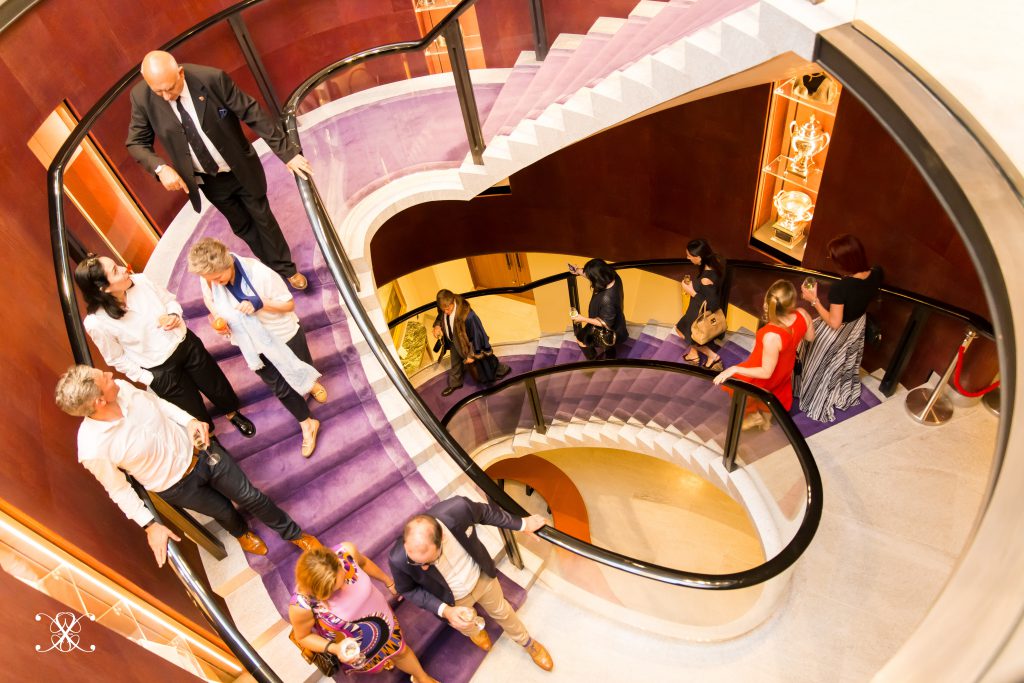 Alistair Tusting, in the ceremonial robes of the Fourth Warden, leads the guests down the stunning leather-walled spiral staircase which is the centrepiece of the Hall. 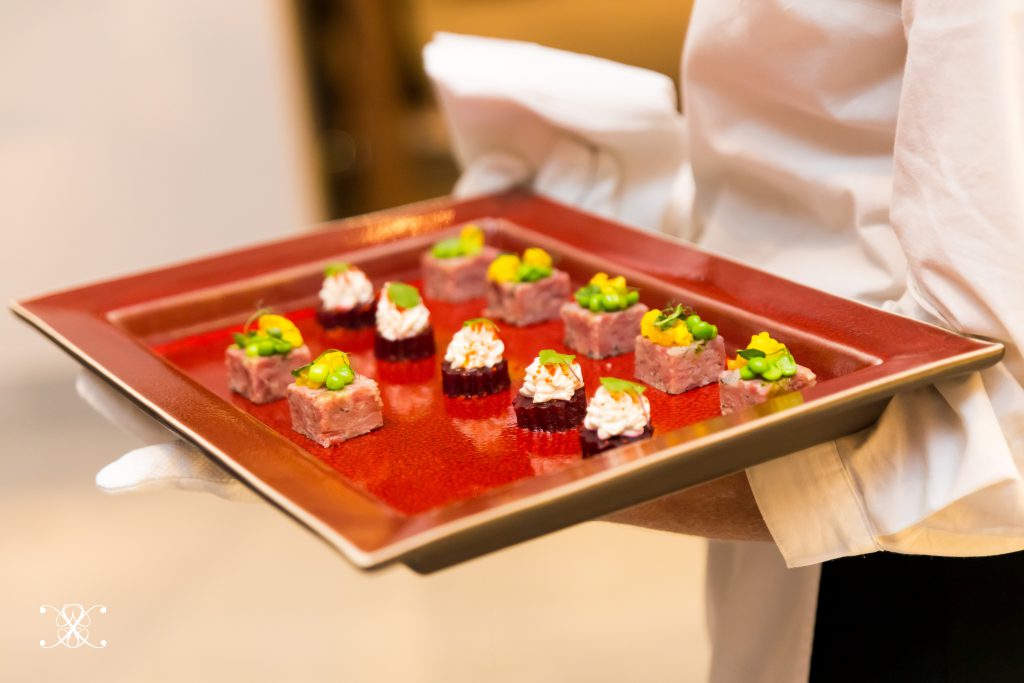 We got into the swing of our evening with a discussion led by luxury retail consultant Frances Card with Alistair and Gillian Tusting. This explained the current work of the Leathersellers Company, both in its charitable giving and also its support for the UK leather industry, and how this links with the Tusting family history and the development of the Tusting brand. After an inquisitive Q&A session, Alistair led a tour of the Eric Parry-designed building with the star feature noted as the 40m tapestry crafted by Dovecot Studios in the livery's banquet hall. Canapes cooked in-house by the Leathersellers' super-talented chef, Sam, followed us around the hall and were met with great delight by the assembled company!

See how it all happened in this short video:

To follow this wonderful and educational evening event, we were delighted later in the week to welcome the current Master of the Leathersellers, Ian Russell, and his wife Sue to our workshop in Lavendon. Ian has made it a feature of his Mastership to seek out and actively promote the businesses of those Livery members who are still directly involved in the leather industry. As such, we particularly enjoyed giving them both a full tour of our manufacturing process. 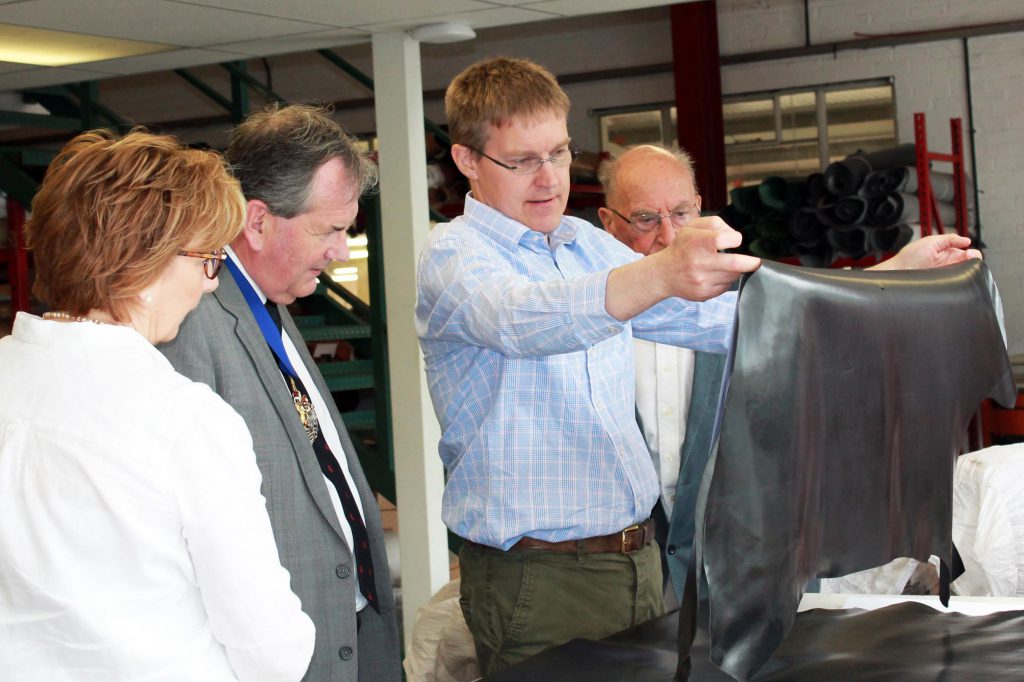 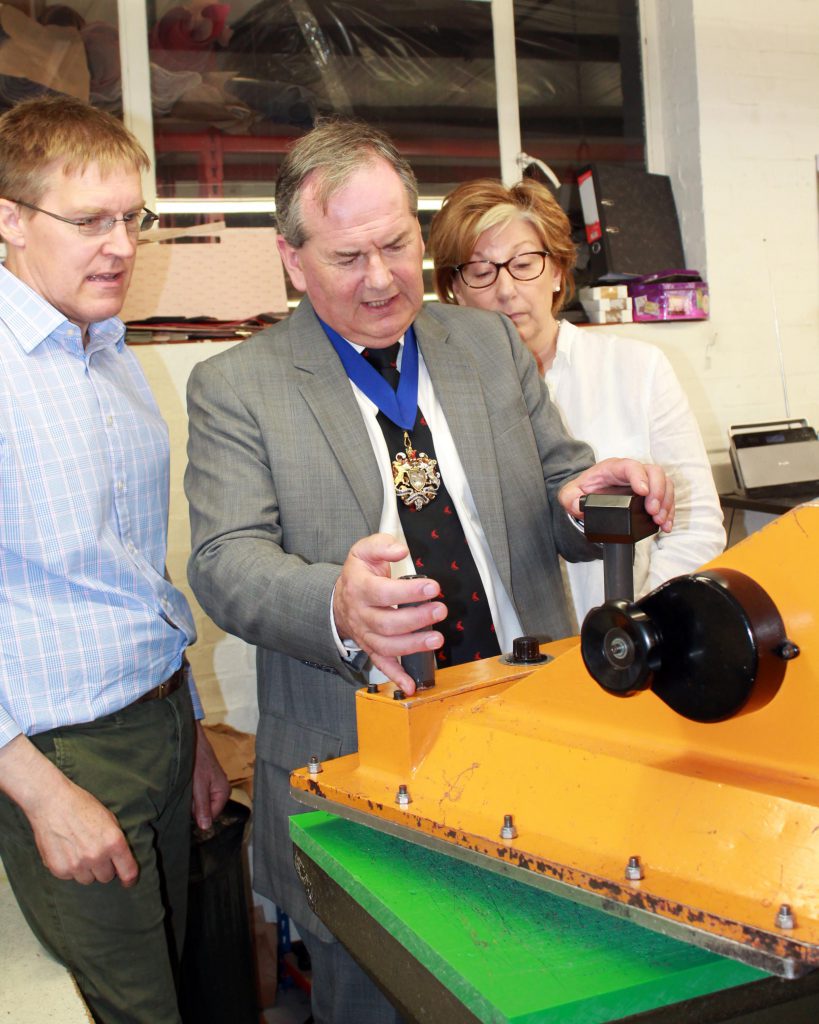 Master of the Leathersellers Company, Ian Russell, tries his hand at using the cutting press. 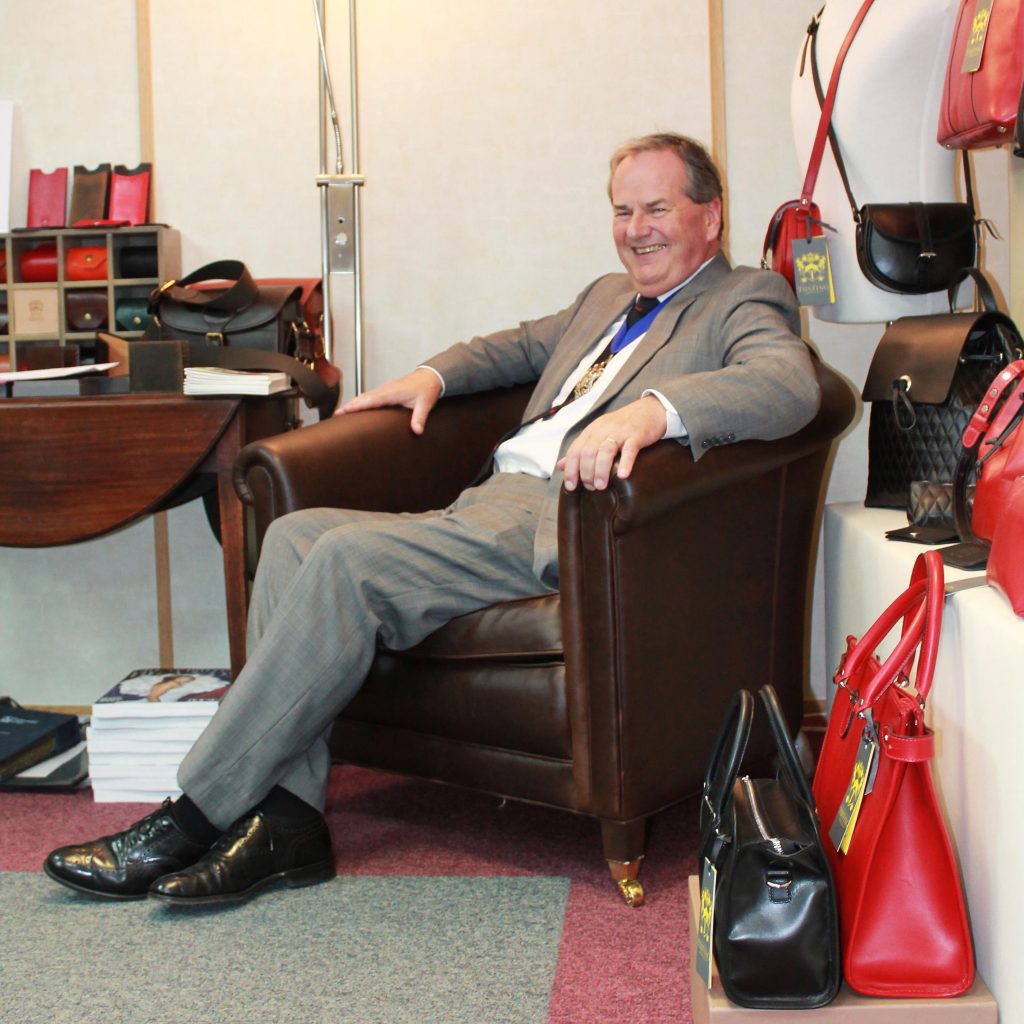 Ian finds sitting in one of our gorgeous buttoned leather chairs, the Arnold, especially comfortable.

There was much discussion on the leather hides used here, and considerable satisfaction taken from the fact that many come from British tanneries, and in particular two tanneries which Ian has recently visited, Pittards in Somerset and Steads in Yorkshire. 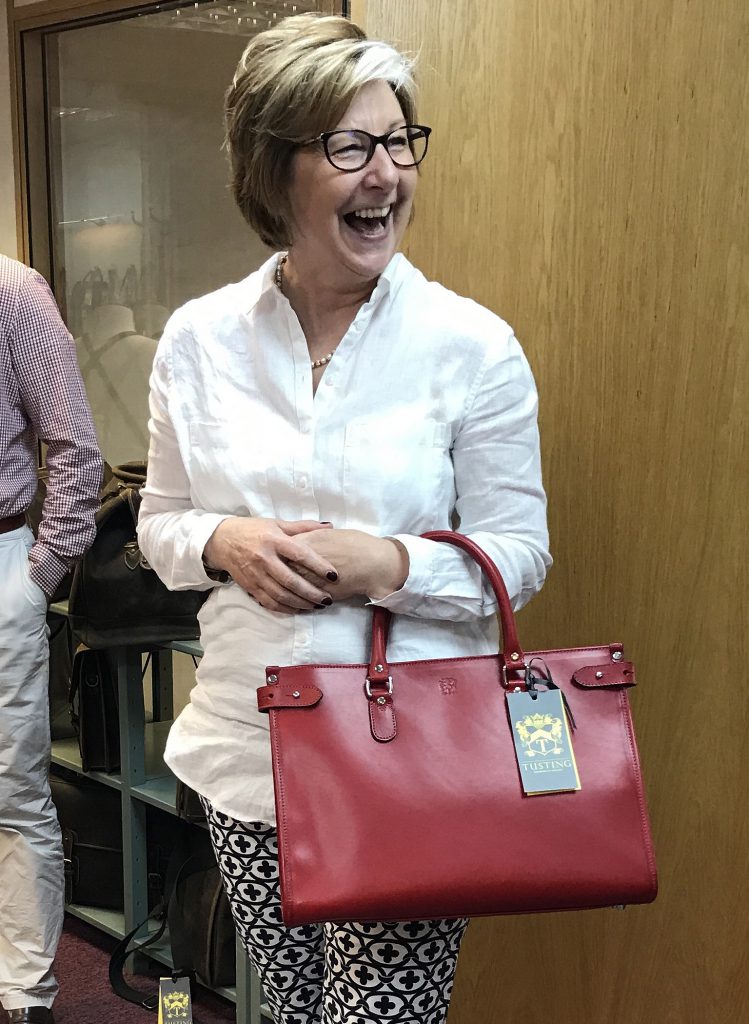 Rounding off the visit with a look around our factory showroom, we invited Sue Russell to select a handbag to take as our gift and use to further fly the Tusting flag on her onward travels.

Sue loved the Kimbolton in gorgeous red and the little Cardington in black, but settled on our most popular lady's backpack: a black quilted Erica which she felt best suited her look and practical lifestyle. 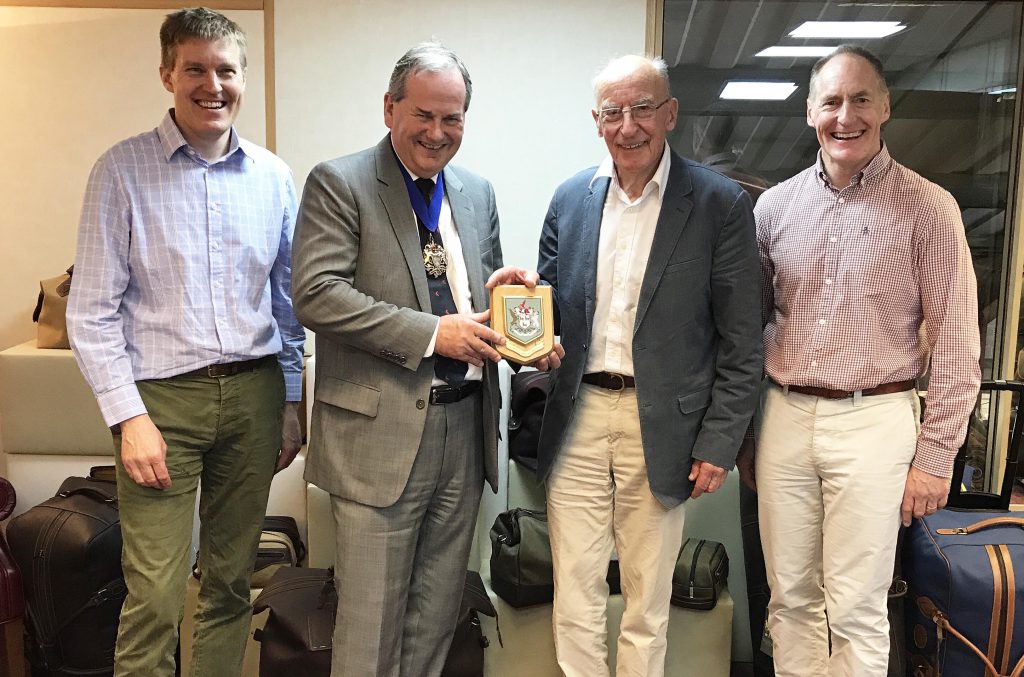 The visit concluded with Ian presenting a commemorative plaque to TUSTING to mark the visit and celebrate the family’s four generations of patronage and service to the Leathersellers Company. May there be many more to come!