Behind the Century Collection

The roots of the Tusting leather dynasty reach back to 1870 when the modern sewing machine had recently been developed. Revolutionising the leather-making industry, this mechanical feat of engineering meant that new ease and speed was introduced to the shoemaking process, allowing the market to grow as makers became more creative and ambitious, working with an array of leathers and designs that would have previously been unimaginable. With this new energy and demand for shoes, came a new energy and a runaway demand for high-quality leathers. 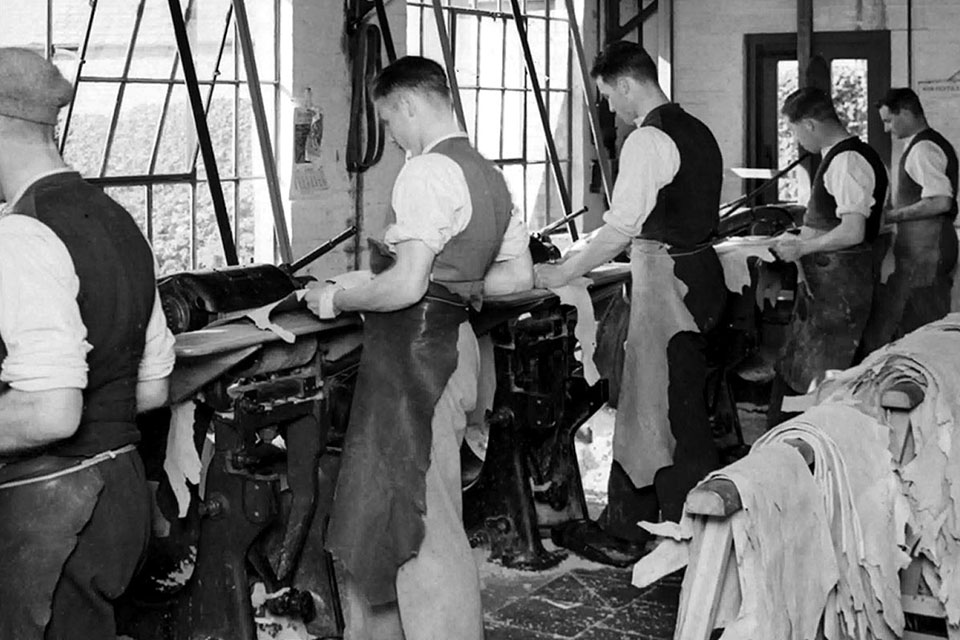 Many shoe factories sprung up in the area along the Nene and Ouse valleys east of Northampton. This allowed them to take advantage of the already abundant supply of tanneries that had been established in the region as a result of the good water supply. The thriving industry, in turn led to the demand for more tanneries. Step forward, Charles Pettit: a young labourer with an entrepreneurial spirit. He saw the opportunity emerging on his home ground and grabbed it with both hands. He founded a tannery and, without even realising it, a British leather dynasty was born. 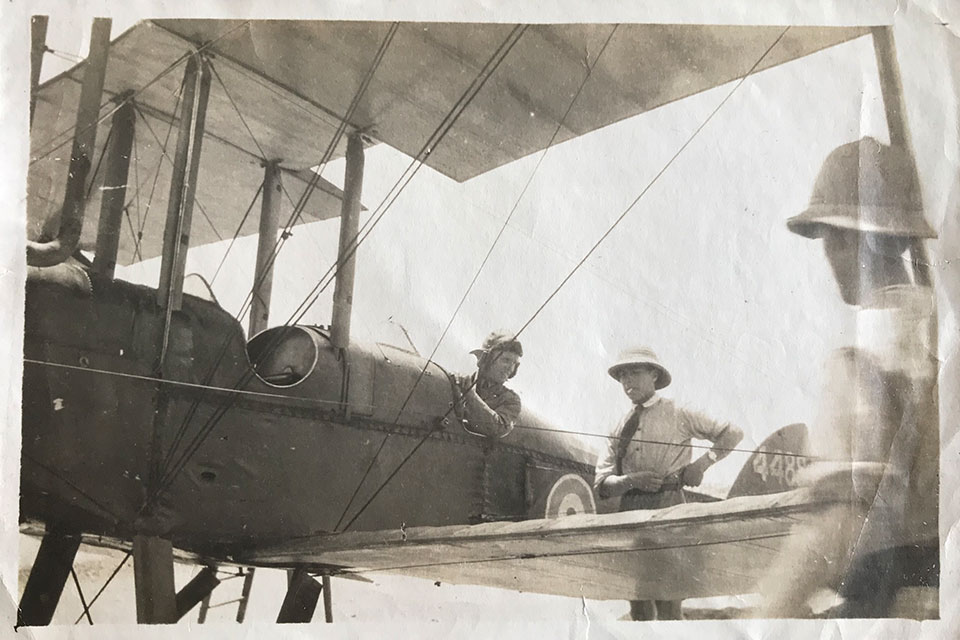 An Heir Is Born

Charles Pettit had only one child, a daughter, Eliza. She grew up around her father’s business and shared his passion for it. As a young woman, she met and married a local haberdasher by the name of John Tusting. The couple had an only child and heir, also named John but known to all as Jack. Like his mother, Jack spent much of his childhood at the heart of the family leather business, and shared her love of it. The family anticipated that he would work alongside his grandfather when he became of suitable age and one day, take over the reins. All was not to be however. In 1914, Jack turned 17. The period should have heralded his coming of age, but instead, he was steered off course by the outset of the First World War. Our young hero was soon enlisted into the Royal Flying Corps. 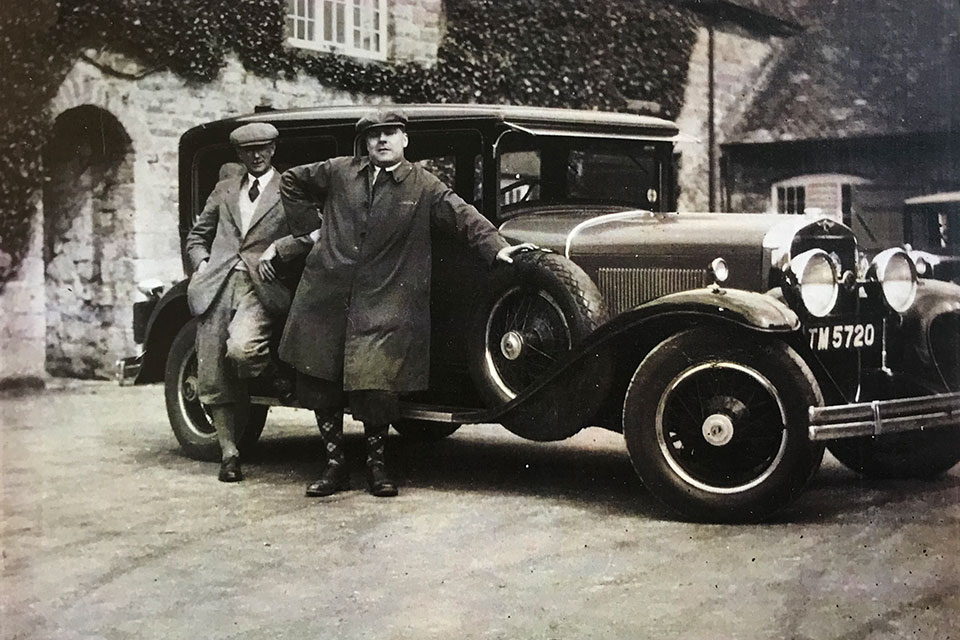 Thousands of miles from his home, Jack was on active service in Egypt when his grandfather, Charles passed away. Unbeknownst to the young man, Pettit’s second wife (of whom Jack was certainly not a fan) decided to sell off the tannery. Returning back to the UK in 1919, Jack found things much changed. The family business was gone, with nothing left behind. 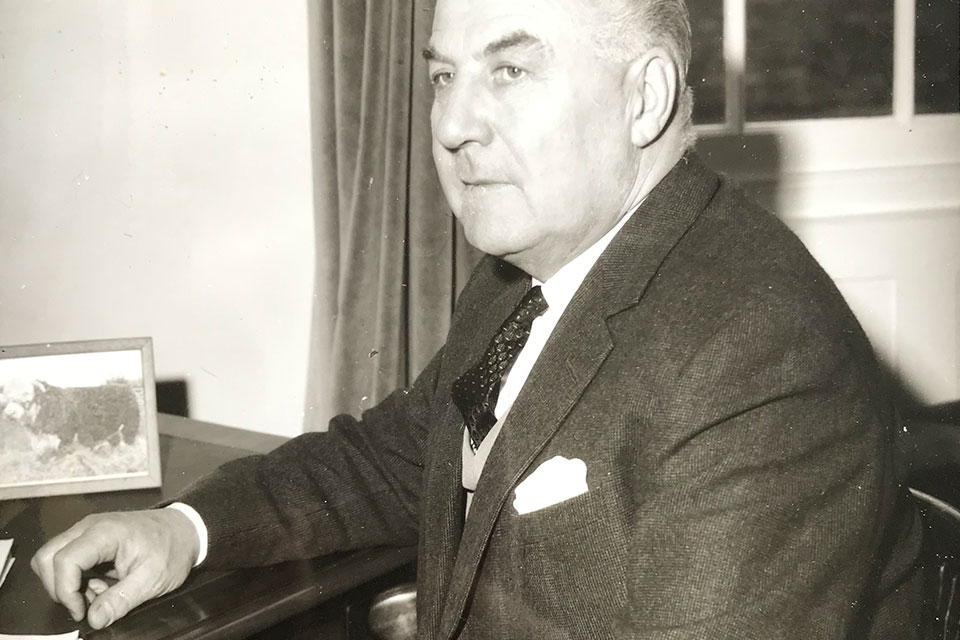 The Tusting Brand Is Born

If there’s anything that can be said about the courageous young Jack Tusting, it is that he was a determined young man with his eye on the prize. He had dreamed of running a tannery throughout his life, and not to be defeated, set about establishing his own state-of-the art tannery. He succeeded in re-establishing the family business with even greater gusto than before, achieving a position of one of the country’s foremost suppliers of leather to the trade and importantly, becoming the first at the helm to carry the Tusting family name. 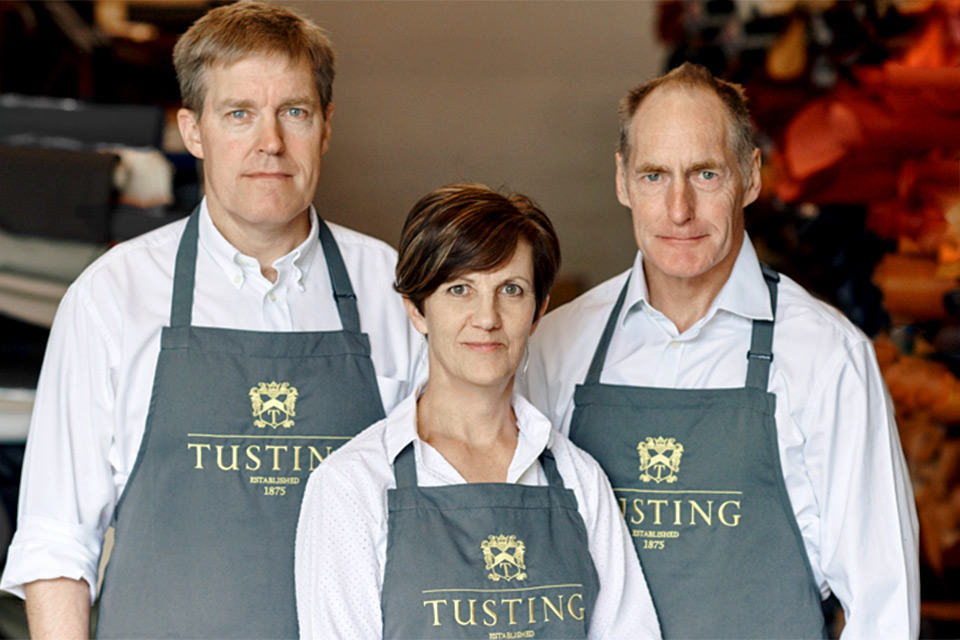 Keeping It In The Family

The rest, as they say (and the story that brings us through to today and a century on from Jack’s renewal of the family business) is history. Three generations later, Tusting family members still remain at the helm of the company, although their focus has shifted from tanning to bag making, all from our premises at Lavendon, a mere hop, skip and jump down the road from Jack’s tannery in Harrold.

Our Autumn Winter collection for 2019, launched 100 years on from Jack’s return, is called Century and pays homage to Jack’s story. Made up of seven pieces, designed to be used together or on their own, Century combines Jack’s aviation past with his passion for leather. Each bag is named after a WW1 airfield, with aviation cues prevalent throughout the designs. Pockets and bag flaps on the collection’s backpacks and small shoulder bag recall the shape of a bi-plane wing, whilst the corner details of our city-focussed holdall and suitcase are evocative of the tail-fin. A piped-leather trim finishes the bags off, whilst an innovative, fully biodegradable lining in Air Force blue reminds us once again of Jack’s roots and heroics. 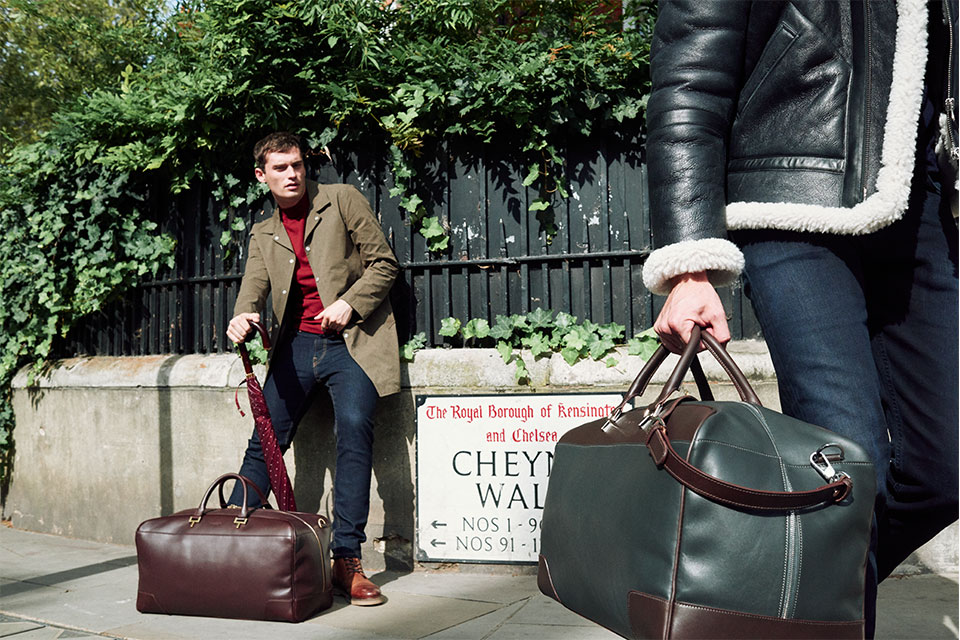 It’s All In The Detail

Available in a choice of three colourways, Century is our most prestigious range yet. We have chosen an exceptional, premium, full-grain hide leather which is lightweight and aniline dyed using modern tanning techniques. The benefits of this are richness of colour tone and leather that feels beautifully soft to the touch, yet is deceptively hard wearing and durable. Pushing the luxury and finish of our bags still further, each one is complemented by the introduction of new and elegant signature hardware, upping the lux level and providing a contemporary nod. This comes in the form of Tusting T-clasps in chrome and brass and redeveloped more shapely handles. 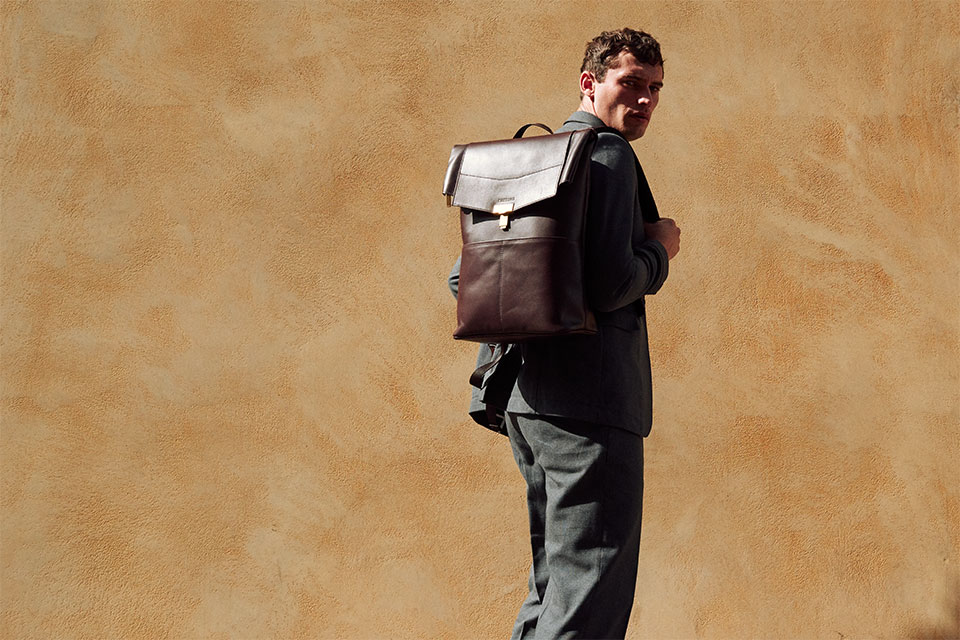 These are bags made for today’s modern gentleman, and as such, thought has gone into every detail; from slip straps to make carrying a bag on top of your trolley easier, to a nifty detachable, interior leather pouch for your phone or passport and concealed, secure pockets, we have put plenty of thought to ensure that functionality and style are balanced in equal measure. These are bags of distinction, in a class of their own.

The Secret Ingredients of a Tusting Bag

We had a lot of fun deciding on the new colours for our women’s collection this Summer. We are a mixed bag at Tusting HQ and with so many chaps in the team, our enthusiasm for Coral, Cherry Blossom and Peony raised a few eyebrows at first, but once the leather had been cut and the bags were made up, any consternation was quickly allayed. 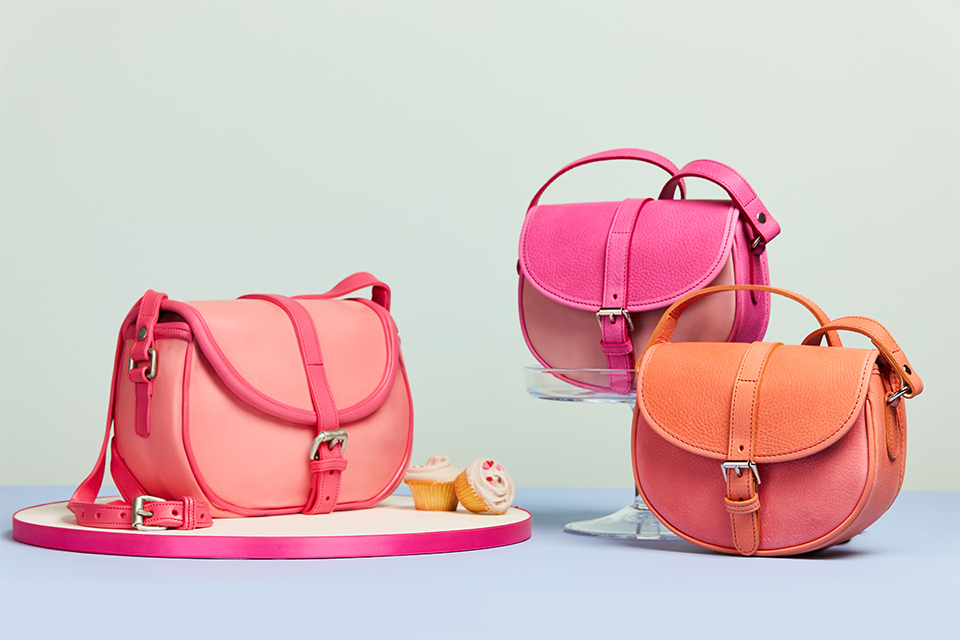 The richness of the newly made-up bag colours brought to mind sugarpaste icings and afternoon teas, two things that make us tick. With this in mind and to celebrate our Summer palette refresh, we commissioned incredibly talented master cake maker Emma Jayne, of Emma Jayne Cake Design to replicate each bag in edible form. The results of this Tusting bake off were absolutely deceptive, showing that our bags really do look good enough to eat! 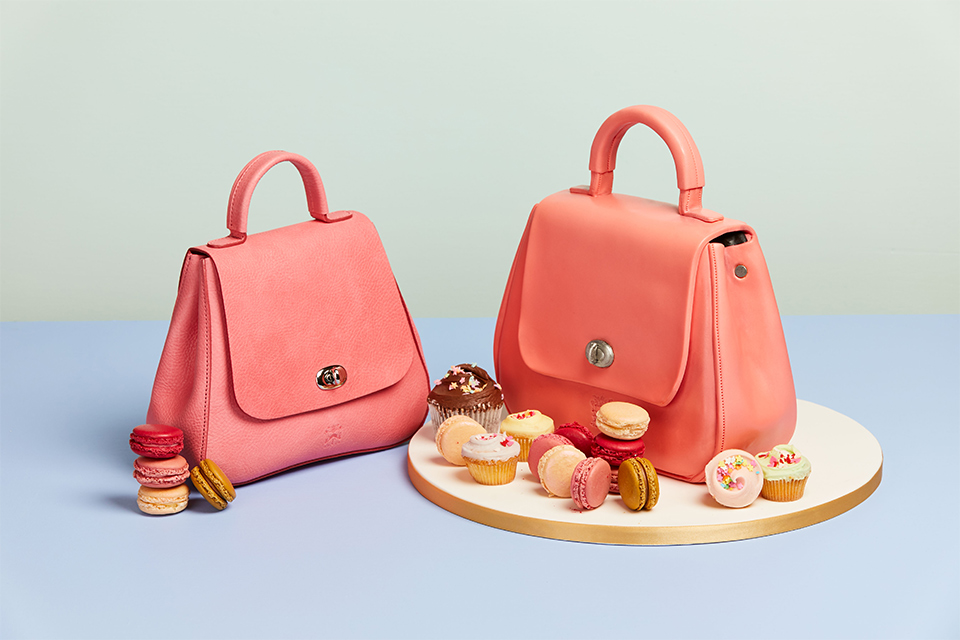 The key ingredients for our new range of Holly and Eliza bags (and indeed our “Little Things” accessories) is a fully vegetable-tanned bridle leather. This has been given a tumbled grain finish. The tumbling process not only gives good texture and softens the bags, it gives them a “well loved” feel too, meaning that they look fresh without looking too new. 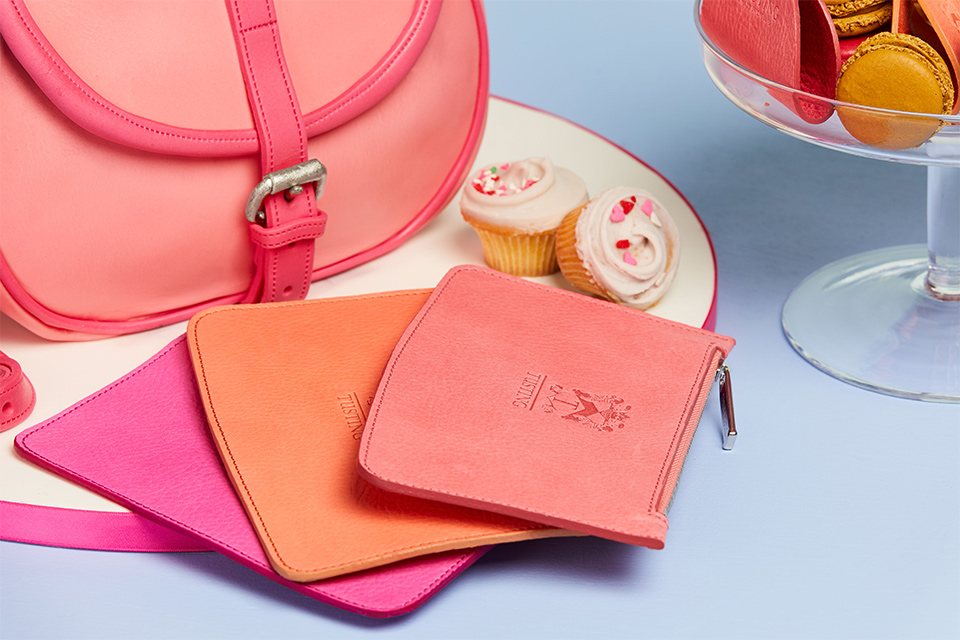 Once our colourways and type of leather were established, responsibility then lay with our managing director, Alistair Tusting whose job it was to source and commission the perfect hide, before it arrived in to our Lavendon workshop, for inspection under the expert eyes of our leather specialist, Terry. 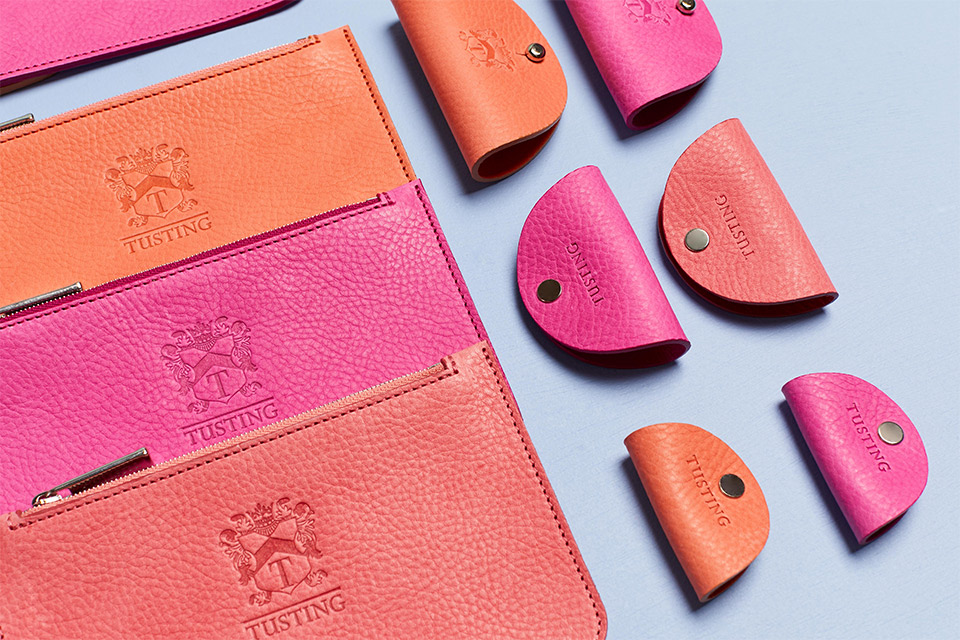 “Eight key steps go into the creation of every Tusting piece.”

There are no shortcuts in any of the bags, luggage or small pieces that we produce at Tusting. Careful thought, planning and construction goes into each one. From design through to pattern making, cutting-out through to skiving and splitting (yes, we have a Chief Skiver…if only he had a business card!) sewing through to the final stages of finishing and quality control, each stage of production is carried out by a dedicated expert, trained in the Tusting methodology. We don’t sit on our laurels either, if our customers or staff feedback on how or where something can be improved, we work to implement any changes and test them to the max before signing them off.

Get an in-depth grasp of the passion and skill involved in the construction process of our products and the materials used to produce them by visiting Our Process.

Back To Top
We use cookies to ensure that we give you the best experience on our website. If you continue to use this site we will assume that you are happy with it.OkPrivacy policy