Sometimes people take on extraordinary undertakings in order to raise money for charity. Riding a Penny Farthing from Land’s End to John O’Groats must surely qualify as one of the most extraordinary challenges ever thought up, so when we heard that one of our customers, David Fox-Pitt MBE and his friend Neil Laughton were up for this, we felt such British bonkersness definitely deserved our support! 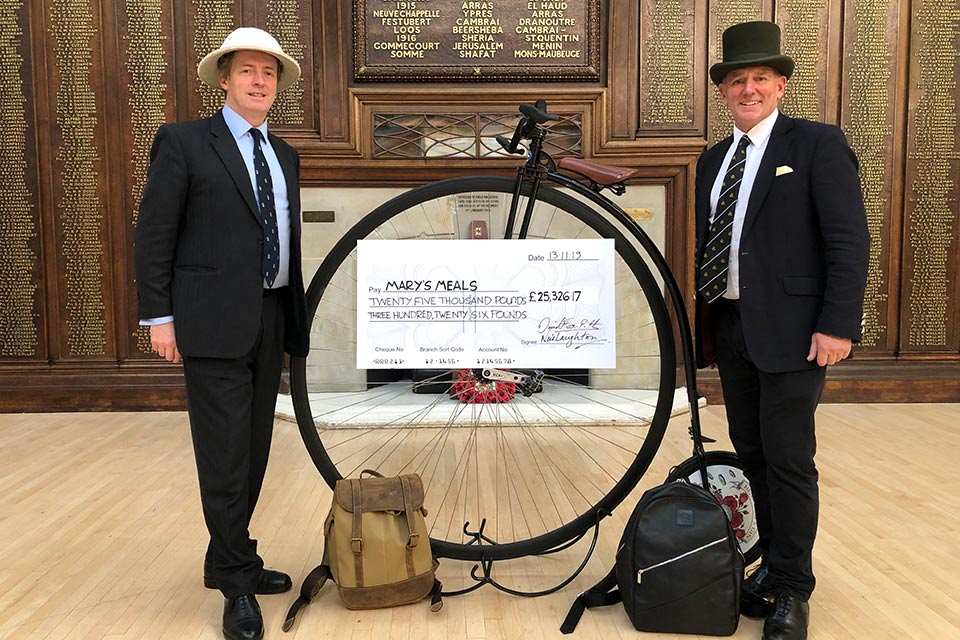 Congratulations to David and Neil who raised £25,326 for the charity Mary’s Meals which will go towards feeding 2,500 children next year. 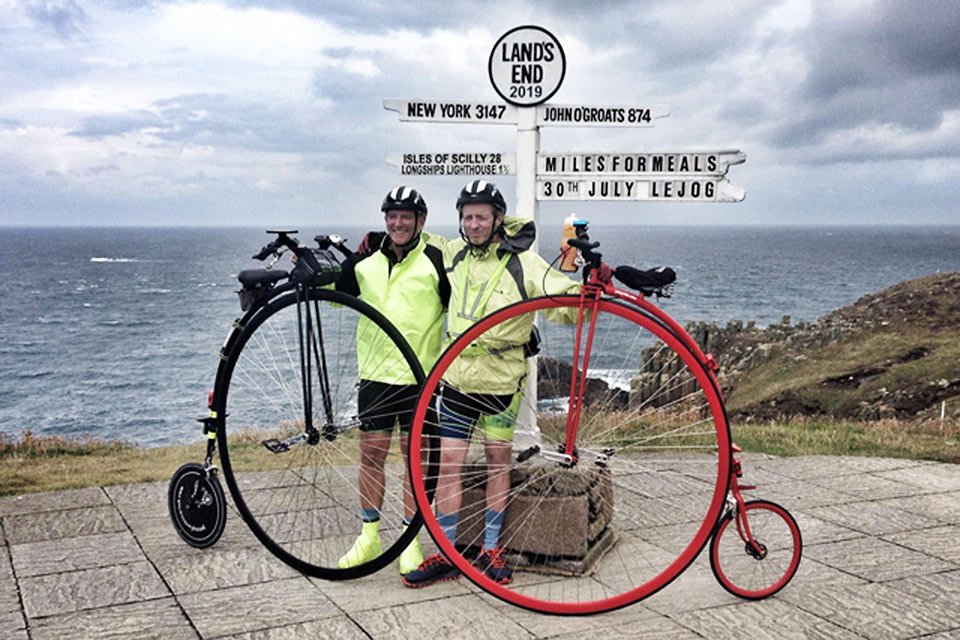 From Land’s End to John O’Groats

Whether you are a cycling enthusiast or not, we implore you to lend a thought to (and dig deep in your pockets for) the admirable endeavours of these brave men. They are the indefatigable founders of the UK Penny Farthing Club, and are England and Scotland Penny Farthing Polo team captains (yes, there is such a sport!). The daring duo have set off on a Penny Farthing ride of a lifetime, cycling 841 miles from Land’s End to John O’Groats atop their 54-inch diameter-wheeled bicycles, all in aid of a phenomenal cause. 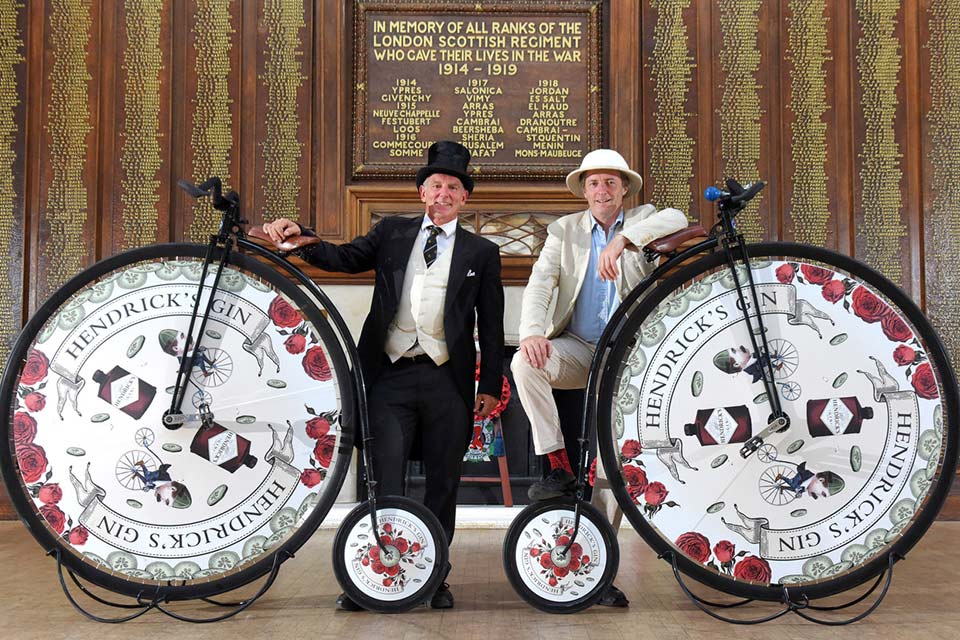 For those of you unfamiliar with the Penny Farthing (some of us spent hours watching them on Blue Peter), the bike is also known as a High Wheel or Highwheeler. It was the first machine to be called a “bicycle”. It was popular in the 1870s and 1880s, with its large front wheel providing high speeds (owing to it travelling a large distance for every rotation of the legs) and comfort (the large wheel provides greater shock absorption). Its name came from the British penny and farthing coins, one much larger than the other; viewed sideways on, the large and small wheels resemble a penny leading a farthing. 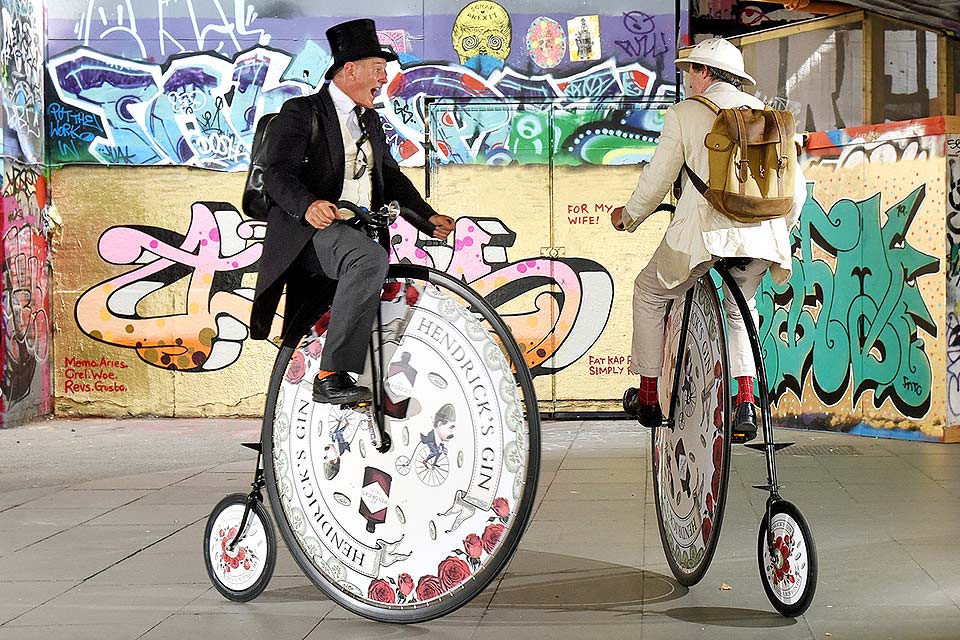 Sponsored by Hendrick’s Gin and the goodwill and generosity of individuals and companies along the way (Tusting included), the intrepid pair is raising money and awareness for Mary’s Meals. This is a superb charity that sets up school feeding projects in some of the world’s poorest communities, making a difference to the lives of 1.4 million children across the globe. By offering a meal in a place of learning, Mary’s Meals not only fills tummies but also attracts chronically poor children into the classroom, educating them and thereby, hopefully, giving them a step up out of poverty. The meals are locally sourced too, providing a much-needed boost for the local economies. 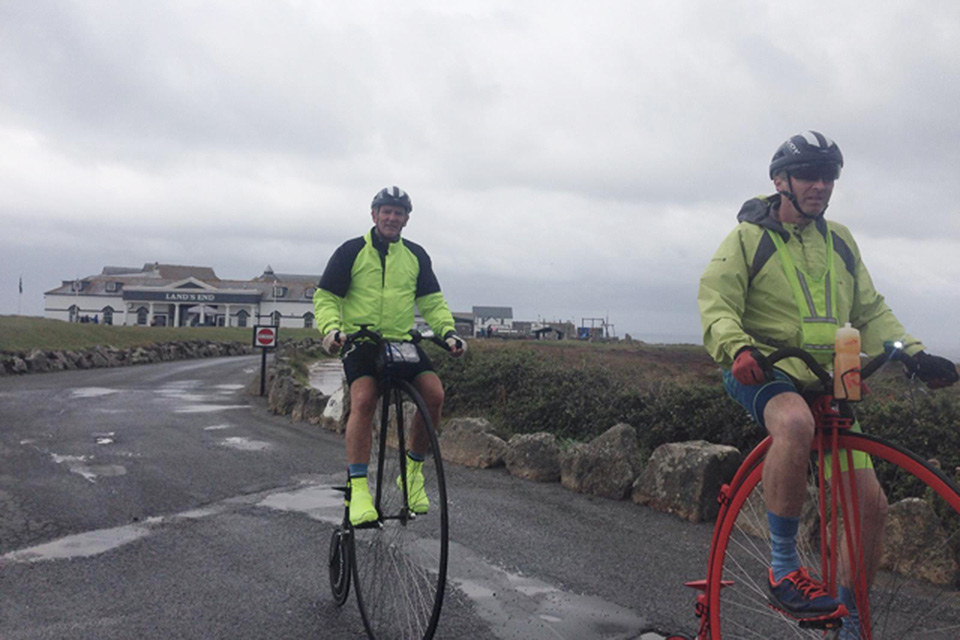 This is not Neil and David’s first brush with adventure. These two struggle to stay still for long! Neil has a passion for adventure and has led numerous Expeditions on 7 Continents – by land, sea and air. He summited Mt Everest with Bear Grylls, circumnavigated the UK on a jet ski and piloted a flying car across the Sahara Desert. In 2018 he hosted the world’s highest dinner party. Partner in crime, David, is a fundraising aficionado. He has raised over £30 million for charities since 1996 both directly and indirectly through his outdoor challenge company, Wild Fox Events. In the 2019 honours list, David was awarded an MBE for his contribution to the adventure challenge industry and charity. 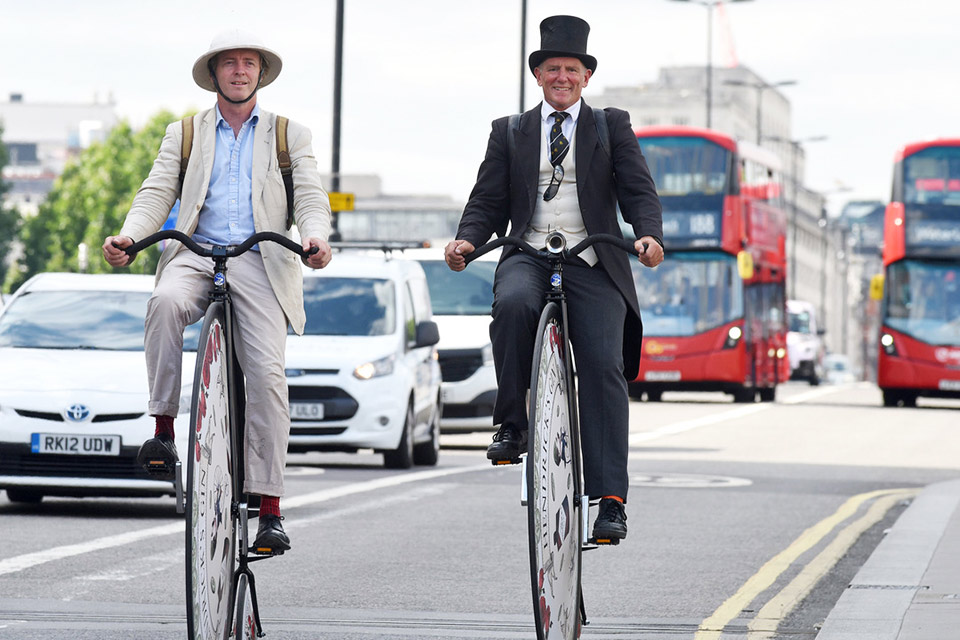 Given such accolades and experience, the challenge ahead for Neil and David still remains a mighty one, especially given that they will be so high up in the saddle for such a long stretch of time (9-12 hours a day). They have set their sights on covering an average 70 miles a day, hoping to collect donations along the way.

Just in case they aren’t tired enough, Neil and David shall travel into town and city centres during the evenings of their ride, in order to show off their bikes, raise awareness of their endeavour and its cause with locals and hopefully boost the Mary’s Meals coffers with a little more money as they do so. They shall be kitted out in traditional, Victorian dress too, ensuring that they do not go unnoticed. Hendrick’s own philanthropic spirit does not stop in enabling the ride, the company shall reward each with a daily Gin token, in acknowledgement of their generosity. 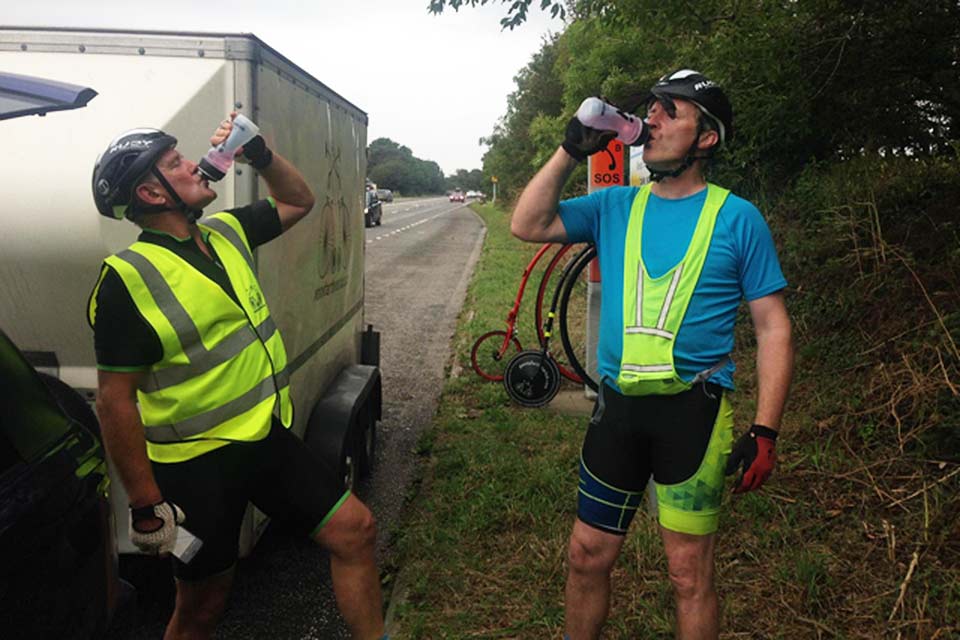 Whilst we are on the jolly subject of Gin, take a look at the sobering statistics below: 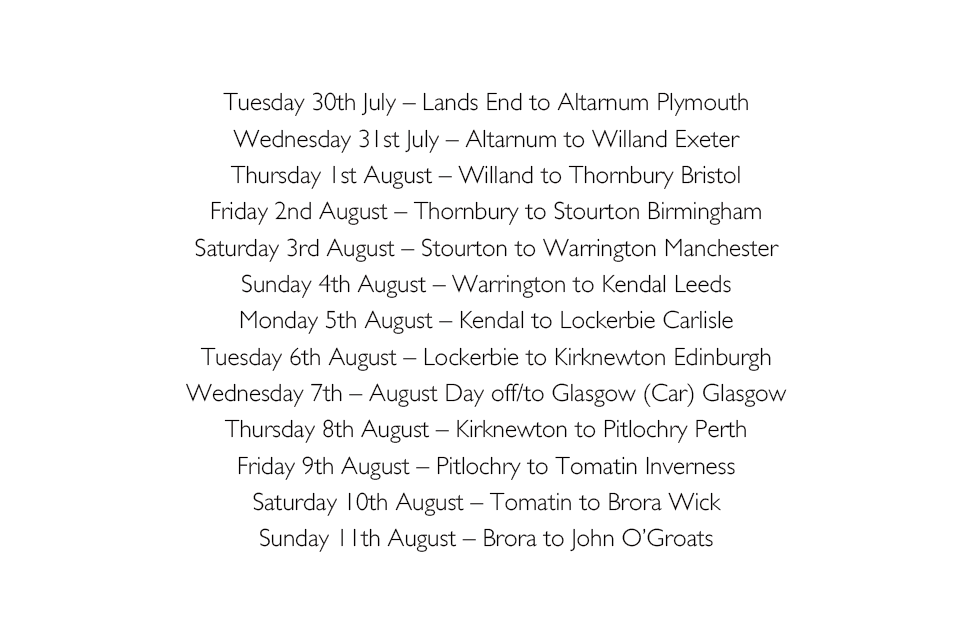 Catch Them If You Can

Why not show your support and try and catch David and Neil in all their finery, as they make their way down the country?  Here’s a list of their daily routes and you can follow their live progress from their GPS tracker here . 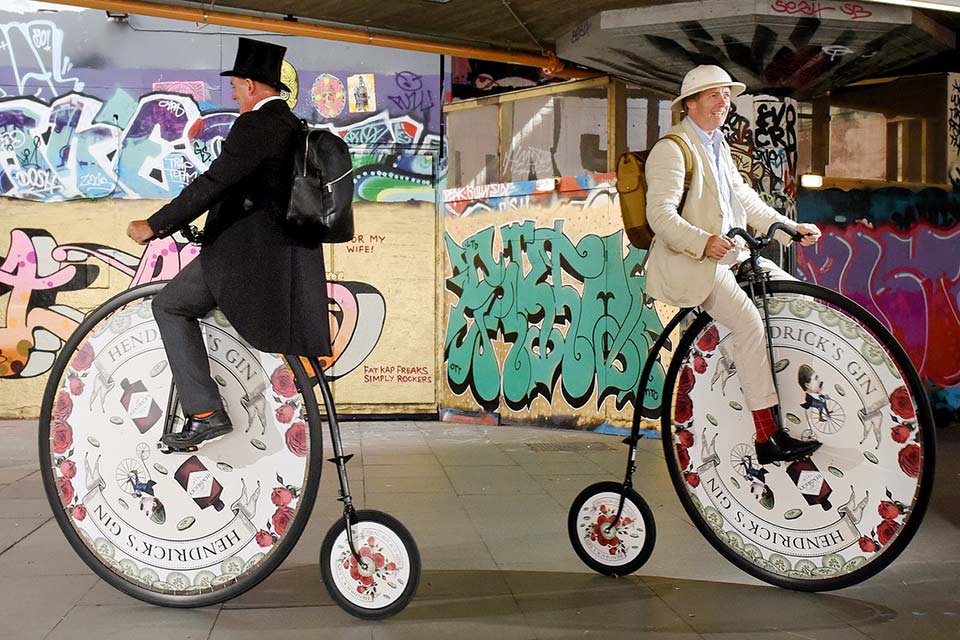 You might also want to check out their lovely backpacks too whilst you are at it. In addition to the healthy donation we’ve made to their fundraising, each of the riders is able to travel hands-free, thanks to their new Tusting Clifton and Walton bags. We did think of offering to make them some pannier bags, but were a little discombobulated at both their size and accessibility! 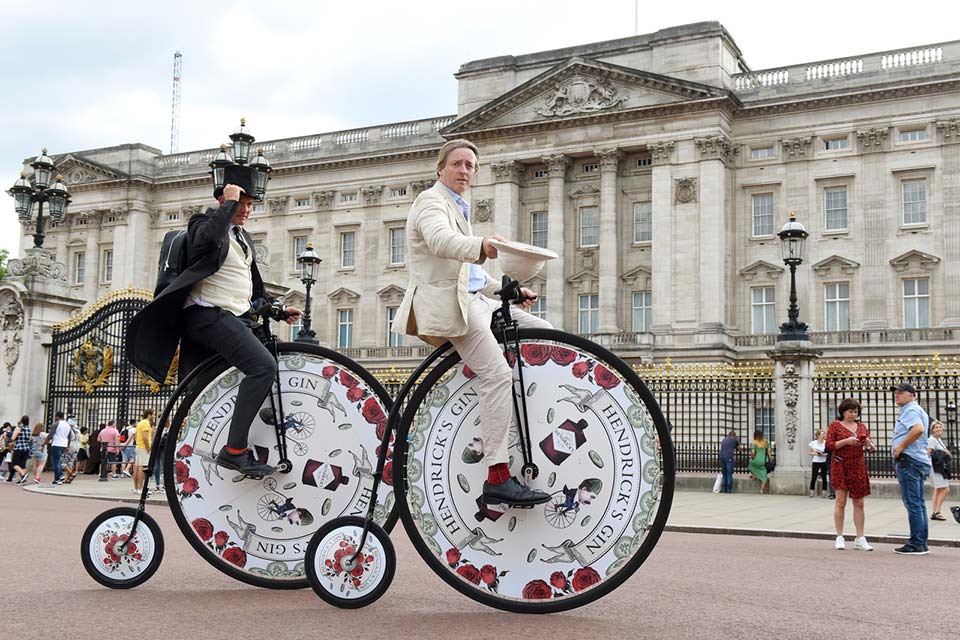 To Donate to the Miles for Meals Ride, simply send a text from your mobile phone to 70085 saying PENNY15 and this will pledge £15. If you prefer to decide the amount, then you can do this on their charity giving page: https://uk.virginmoneygiving.com/davidFoxPitt . Please give generously!